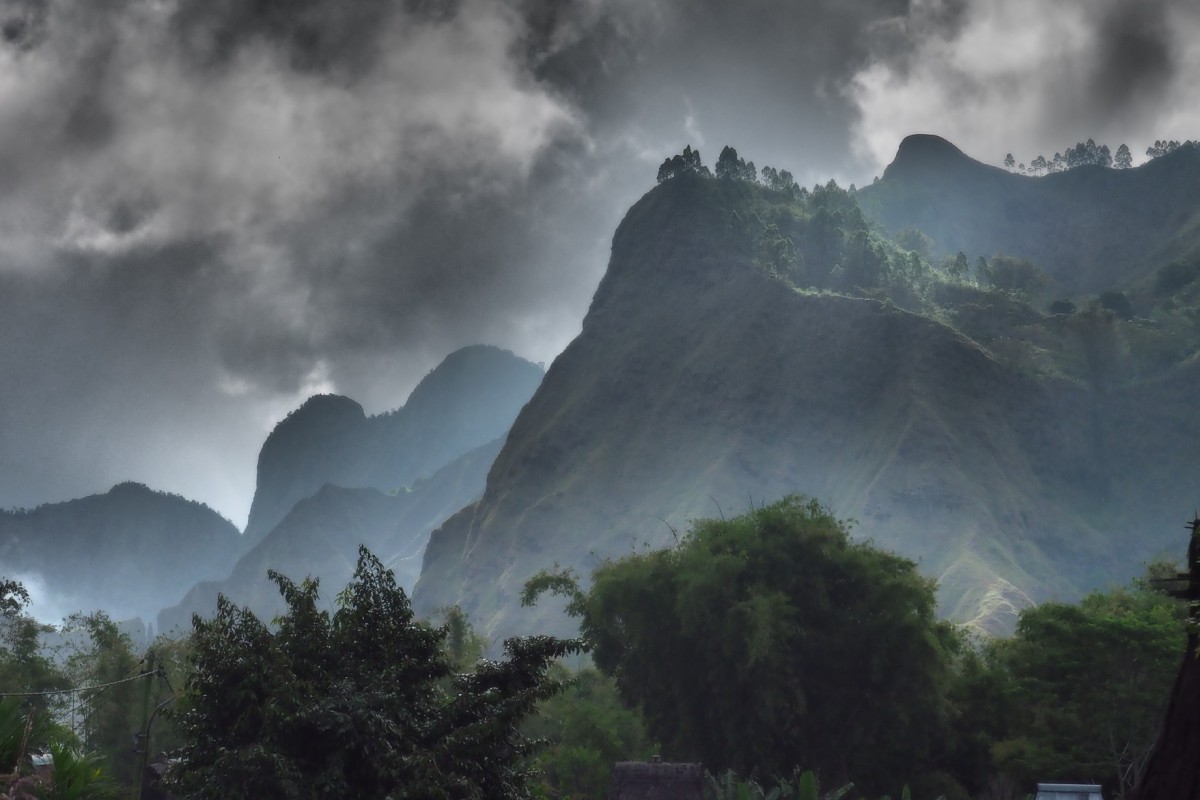 The grandly named Trans Flores Highway cuts through forests, climbs over mountains and skirts around volcanoes on its 550 kilometre route from Labuanbajo to Maumere. Although it’s a single lane highway throughout it is an impressive feat of engineering, with spectacular switchback routes crossing a wild, luxuriant, dramatic landscape of dense forest, landslides, ricefields and lakes.

For whole sections of the journey, signs of human habitation can be sparse. But the highway links the towns and cities with diverse, traditional rural cultures that seem unchanged in centuries alongside the five distinct linguistic and cultural groups that make up the islands population, from the west to the east.

This beautiful four day roadtrip (and our diving in Komodo, of which more later) plunged us right back in to South East Asia, after our brief visit back to England (see ‘Home & Away’ ) in September. It was a fantastic way to acclimatise to the adventure and excitement of travel, we were back on the road and in a spectacular landscape full of wonder.

In comparison to Bali, Java and certain sections of Lombok, Flores seemed less developed in terms of tourism, and the locals less reliant on this as a source of income. The overwhelmingly rural economy seemed productive and people looked to have larger houses, gardens and a sustainable way of life. Of course poverty is never far away, but the roads were full of children walking to school and we were met with lots of smiles and laughter. 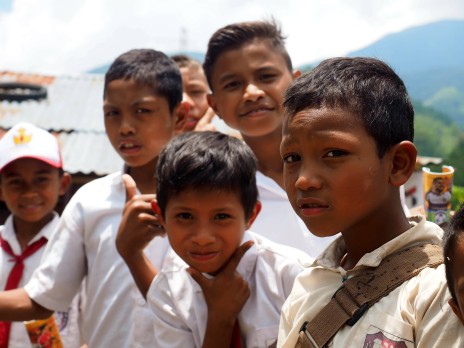 The land in Flores seemed productive. Vivid green ricefields stretched across valleys, fruit and vegetables were on sale in roadside warungs and the forests themselves were full of jackfruit, papaya, mangoes, cashew, macadamia, bananas and pineapple. 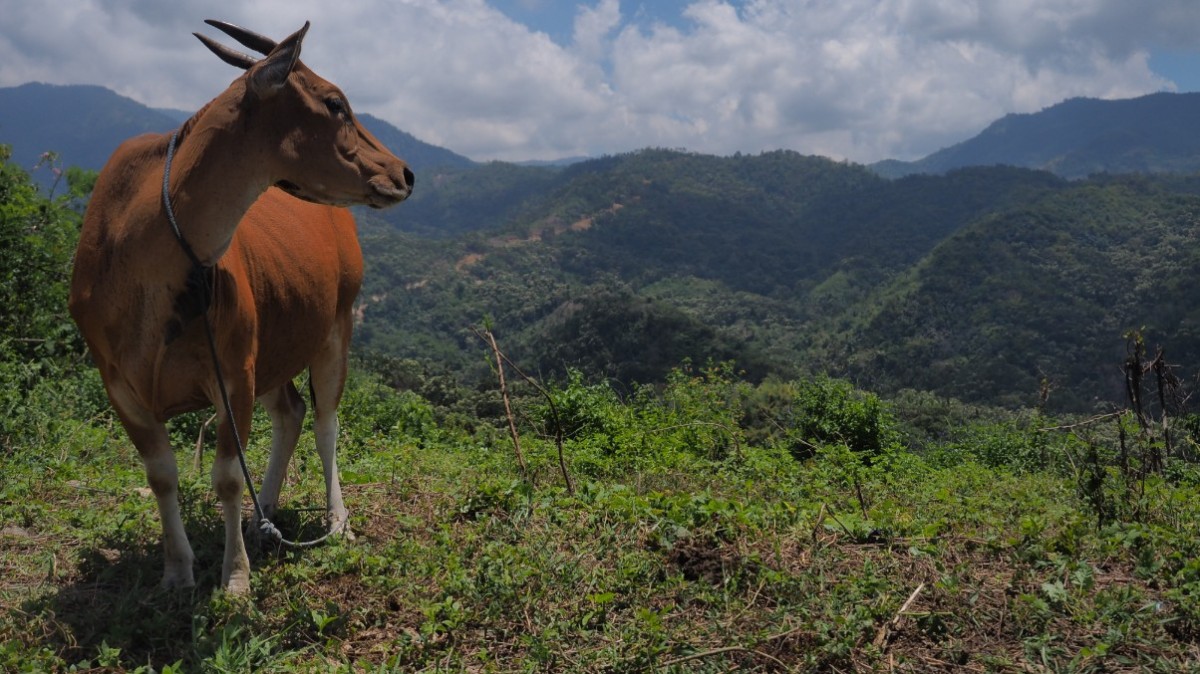 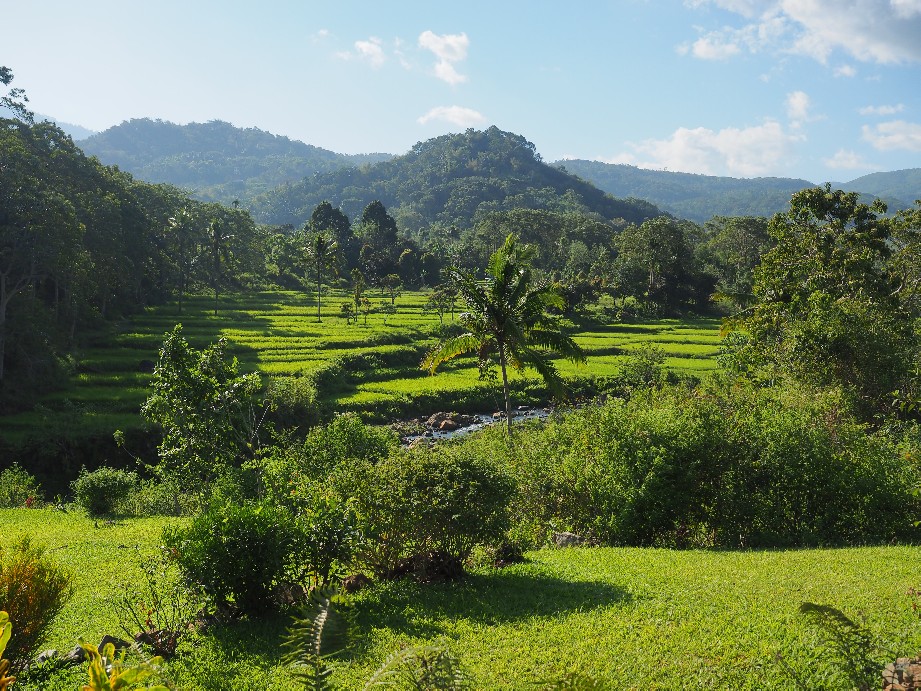 Of course much of central Flores is mountainous and pretty near impossible to cultivate. The terrain and the thick groves of bamboo, rising 20m+ mean that some areas are impenetrable.

We passed by some impressive volcanoes on our journey, some of them like Agung Inierie, currently active. 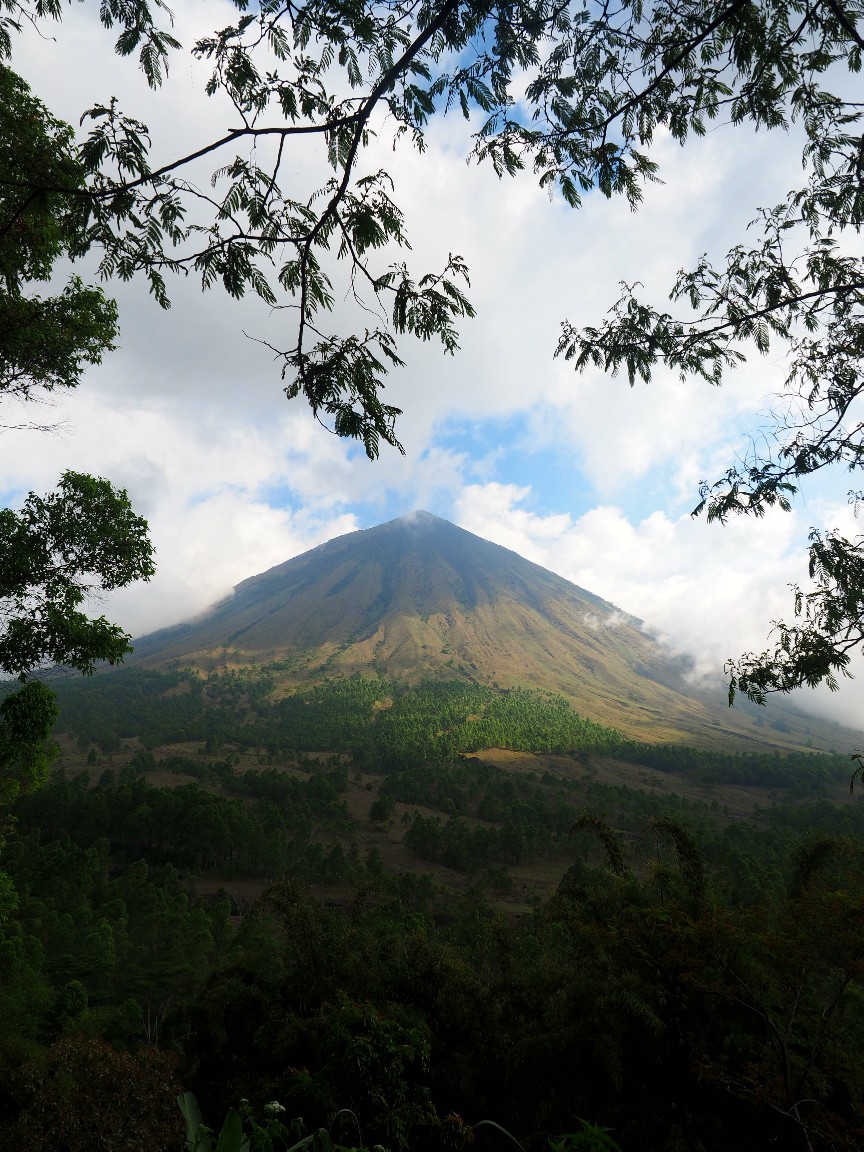 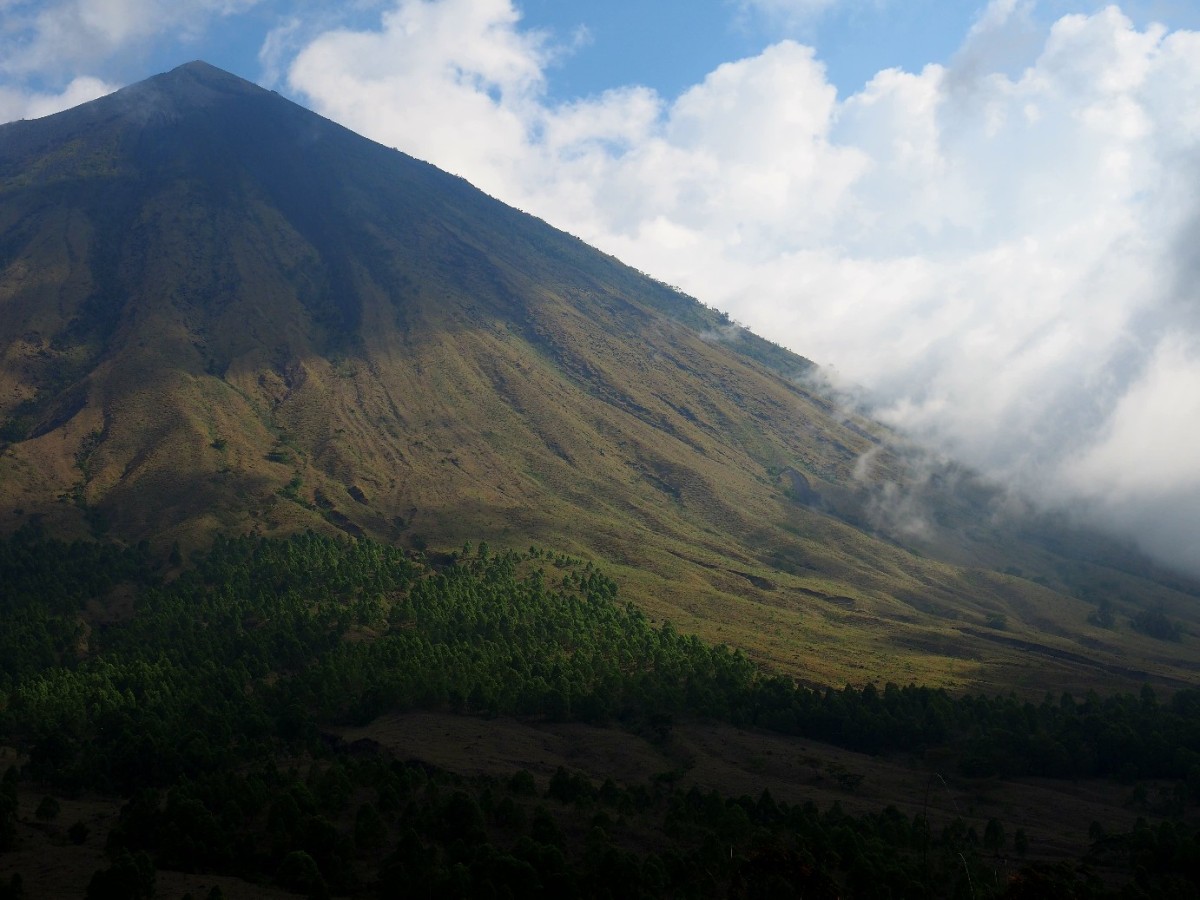 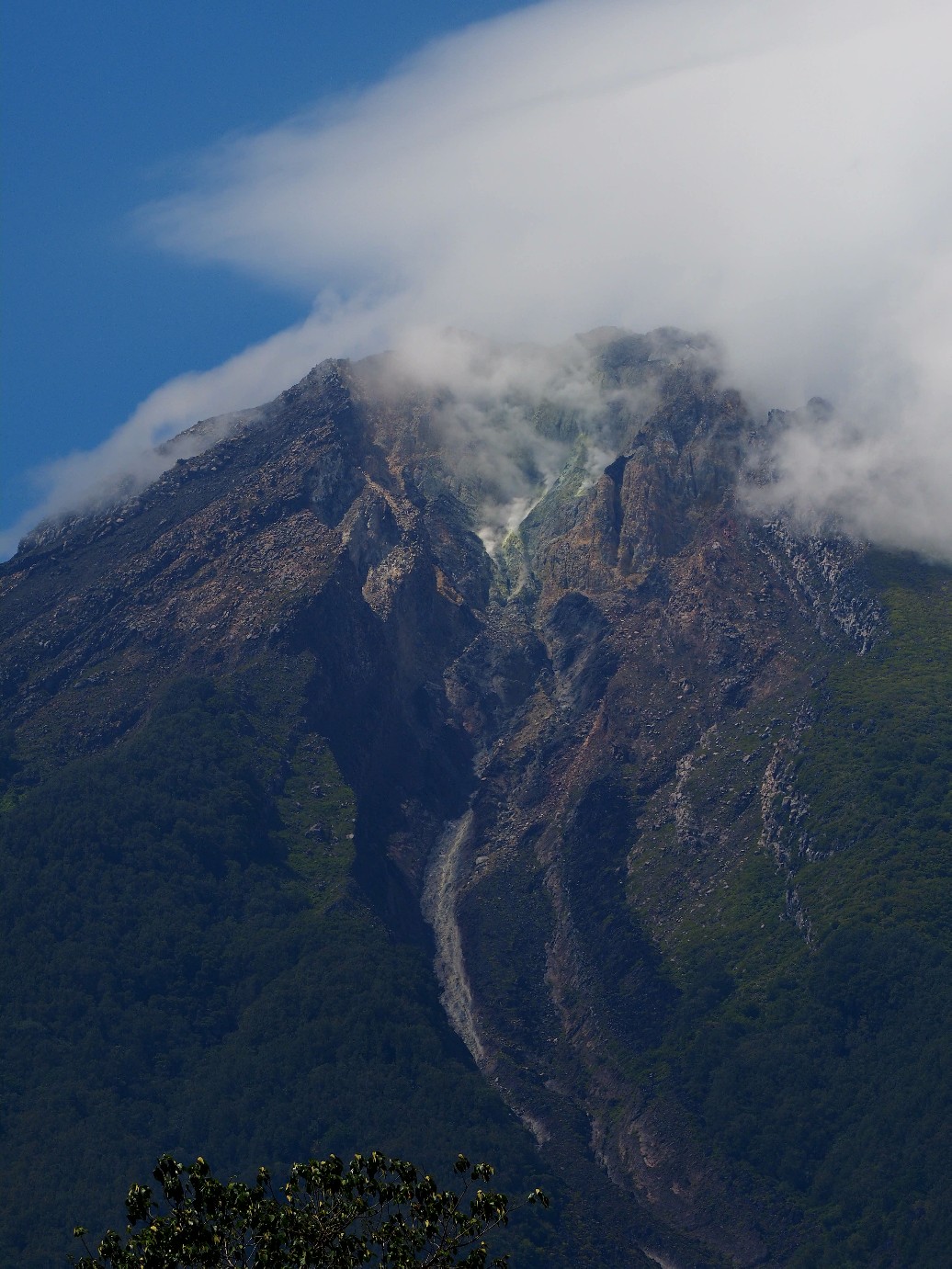 We also came across a tribe of monkeys, foraging for food, on our journey through the mountains. 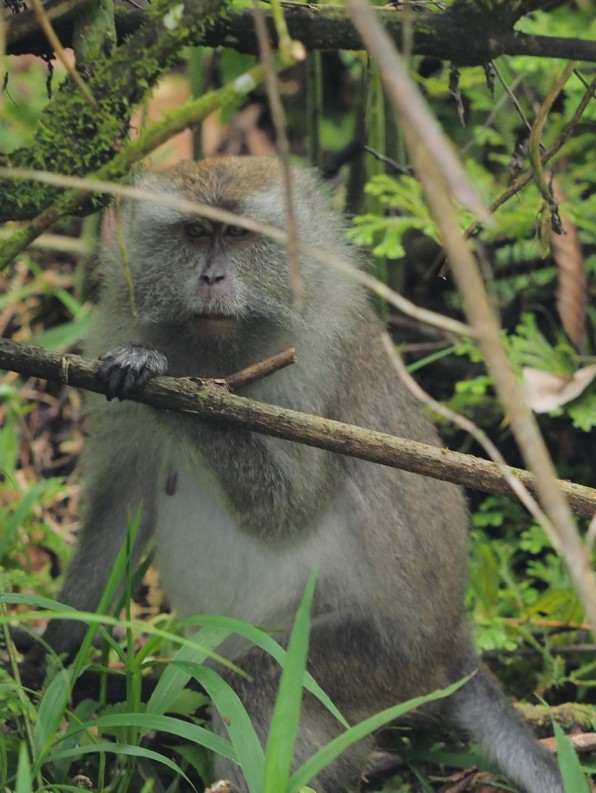 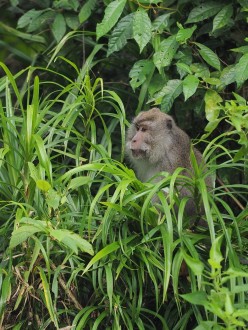 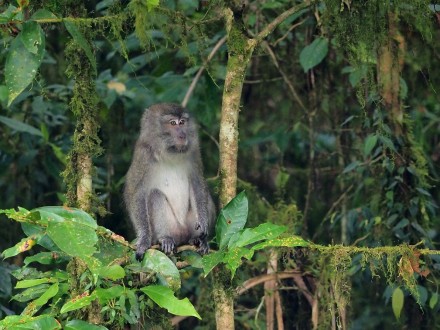 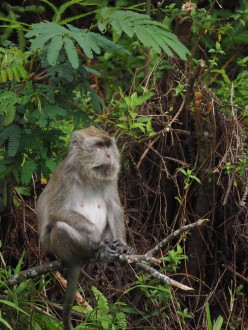 We visited a number of traditional villages  including Bena, where housing is a collective endeavor, built and lived in by families, some of whom are said to originate from Java. Although declaring themselves Catholic, it was clear that this was a religion bolted on to the ancient adat/animist beliefs which governs their daily lives. 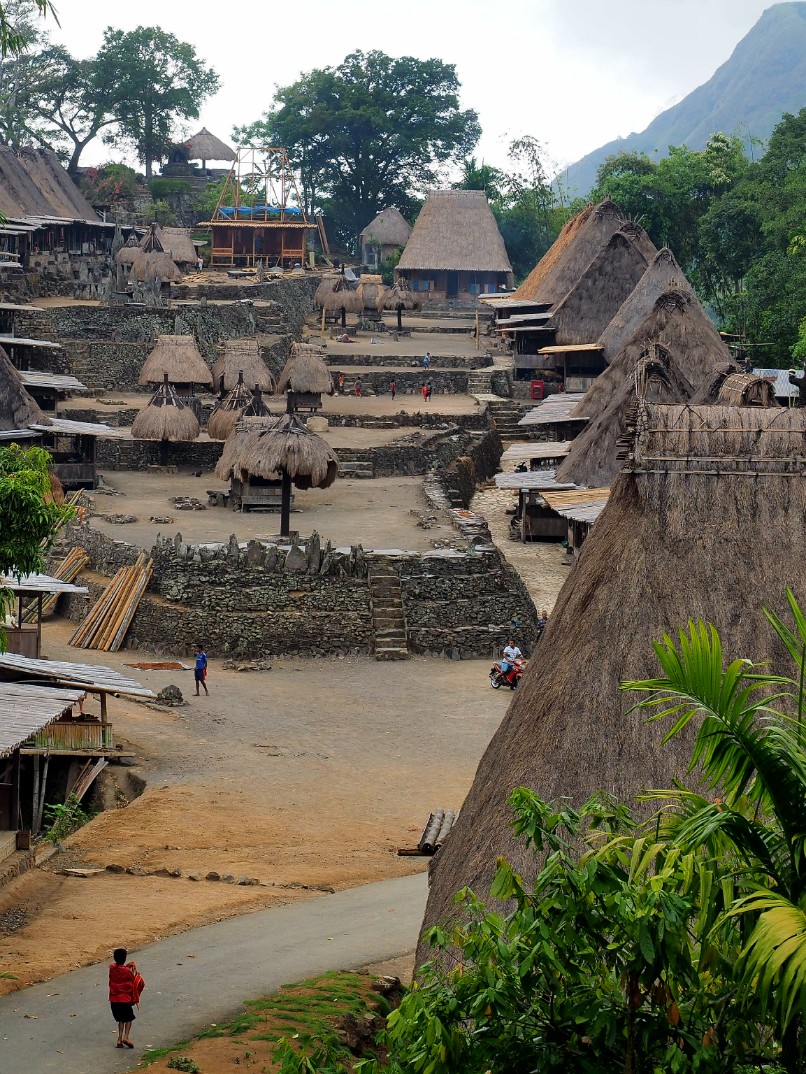 We were able to meet and interact with many people on our journey. The general lack of tourists and the company of Mr Donatus and Herman helped (along with a bit of origami for the children).

Their pictures and portraits capture the beauty and diversity of Flores. 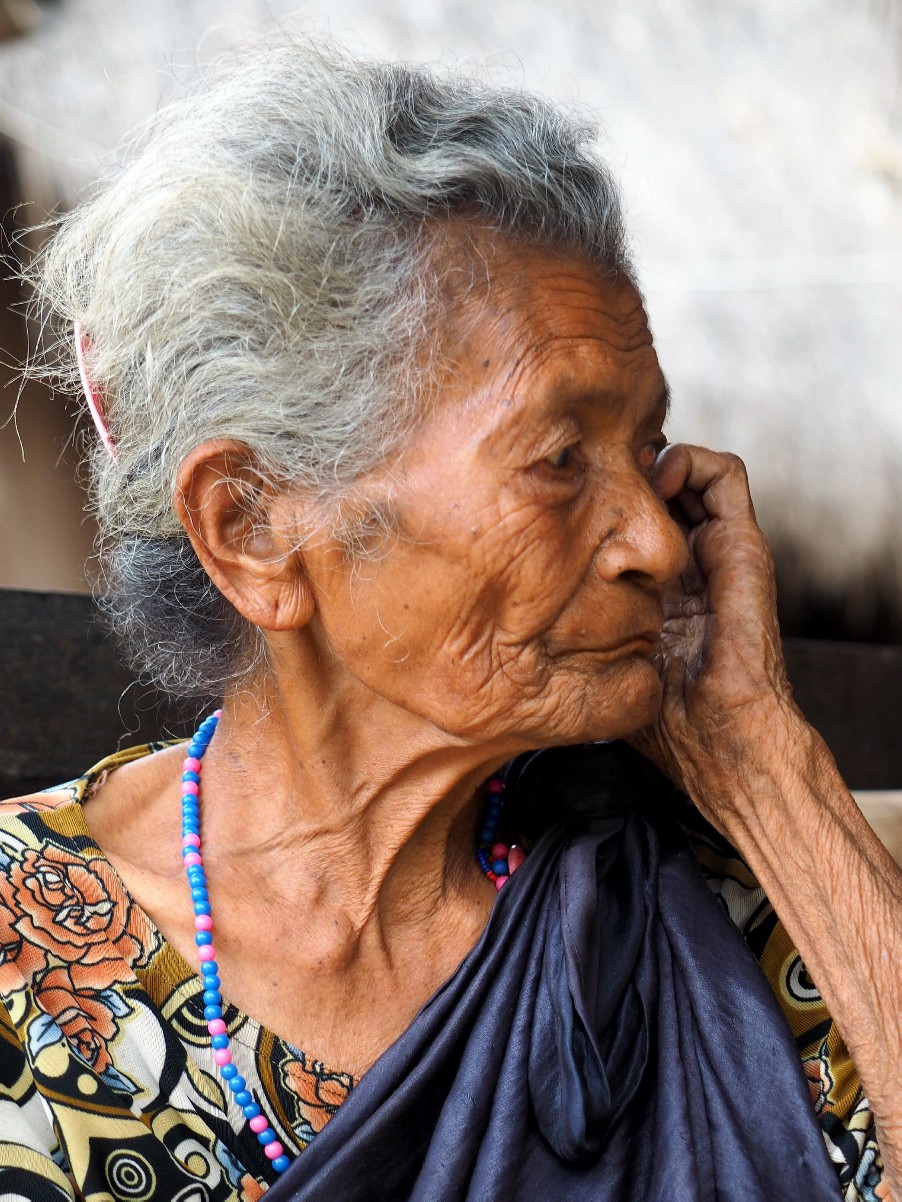 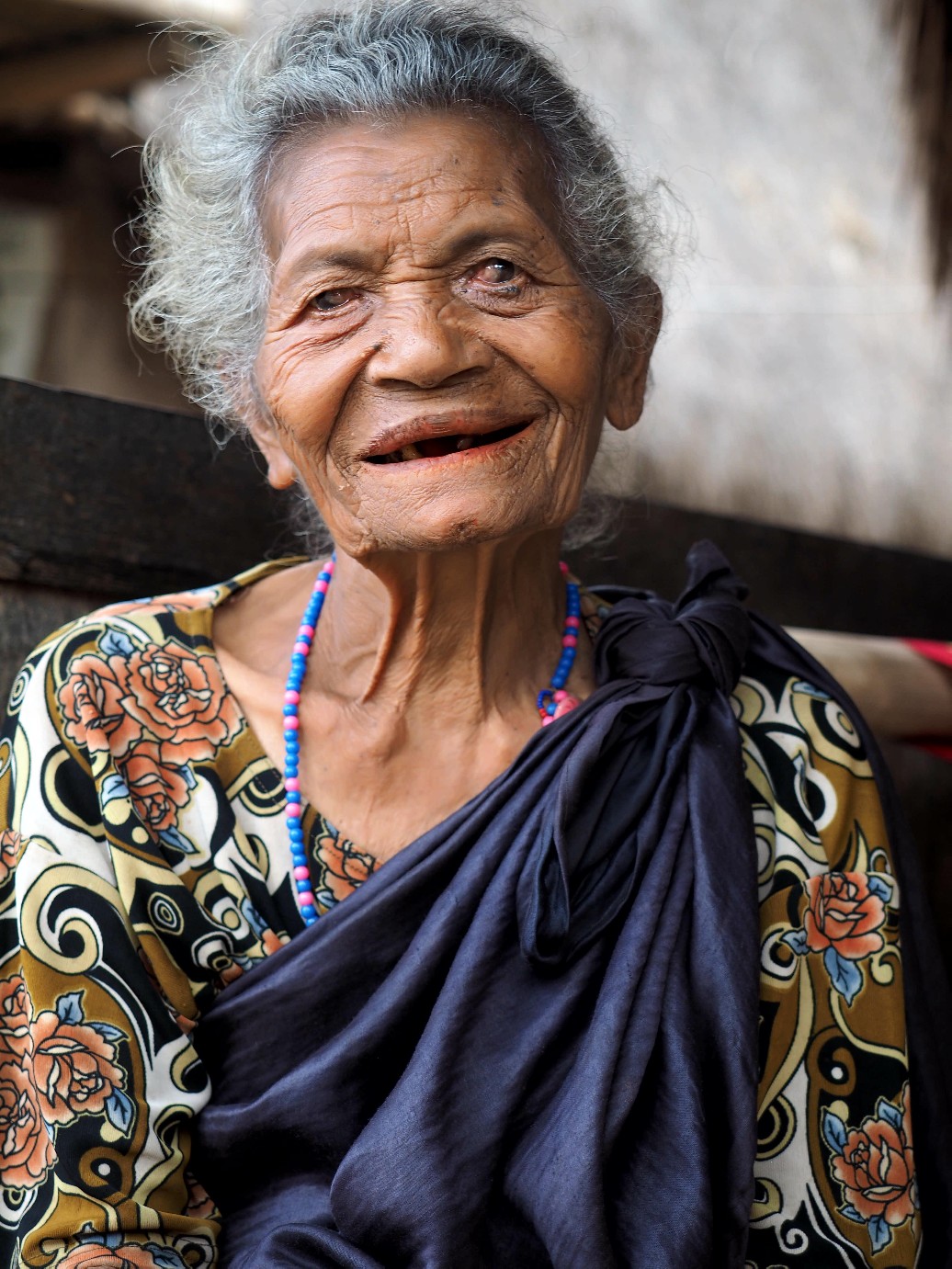 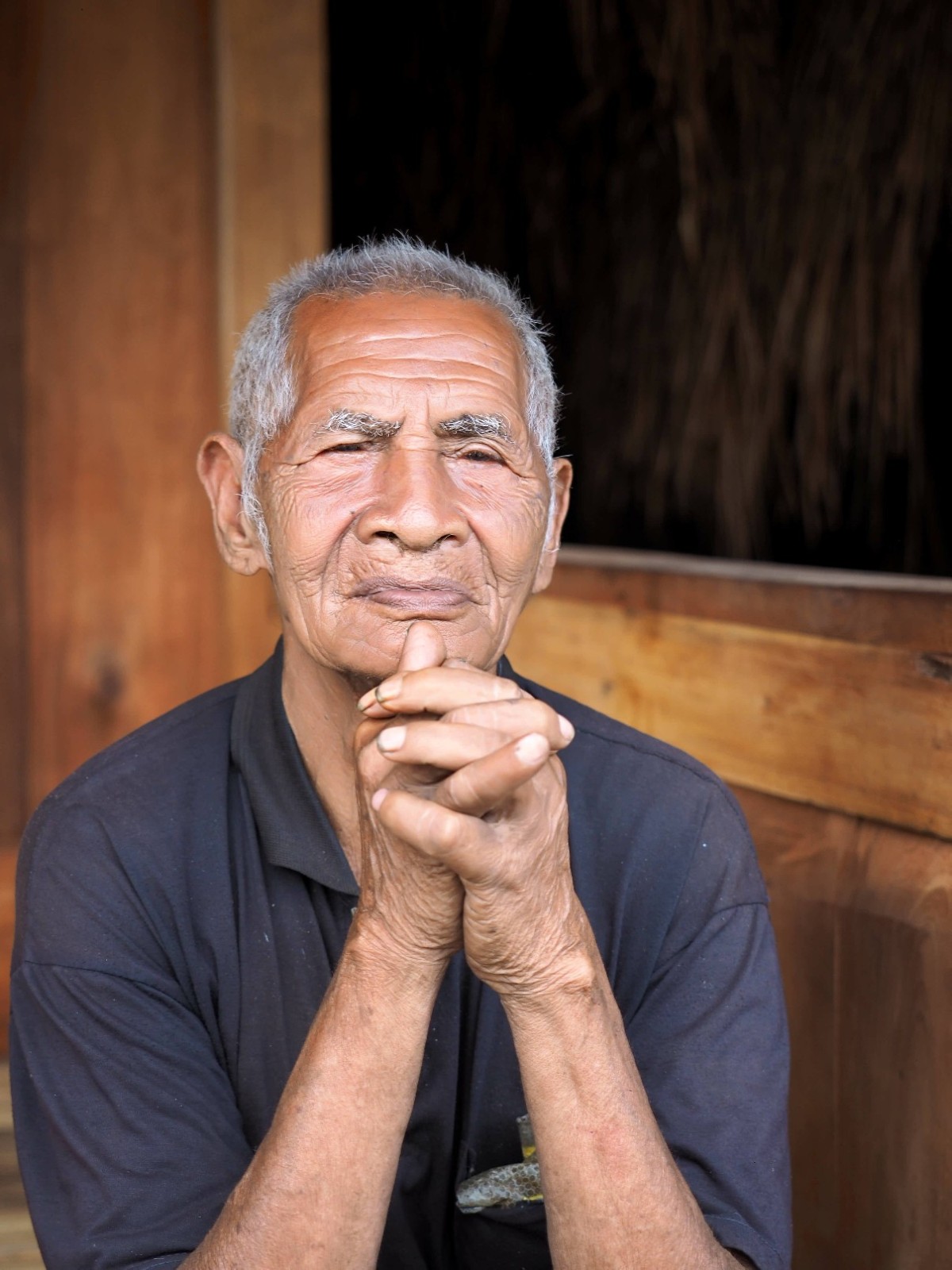 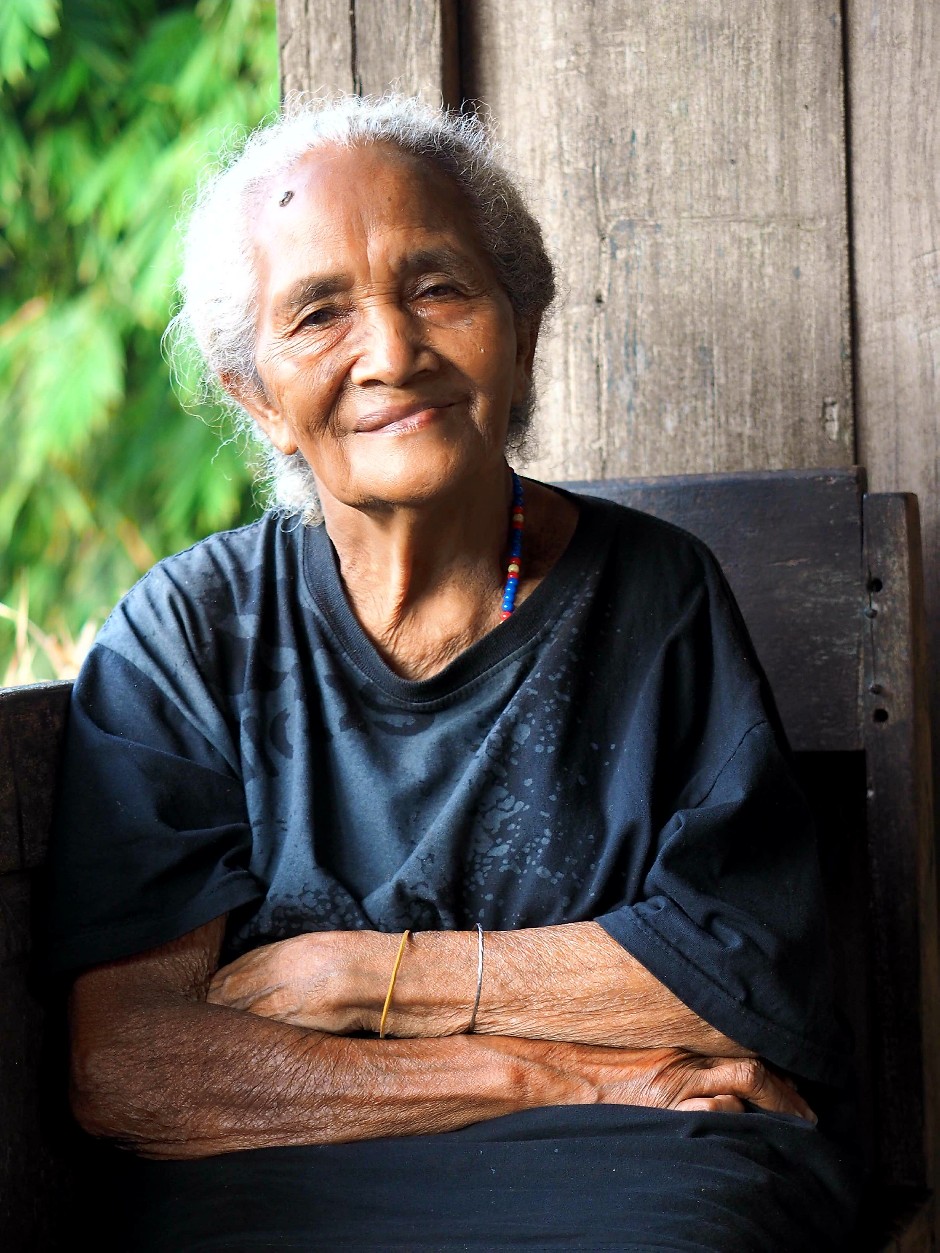 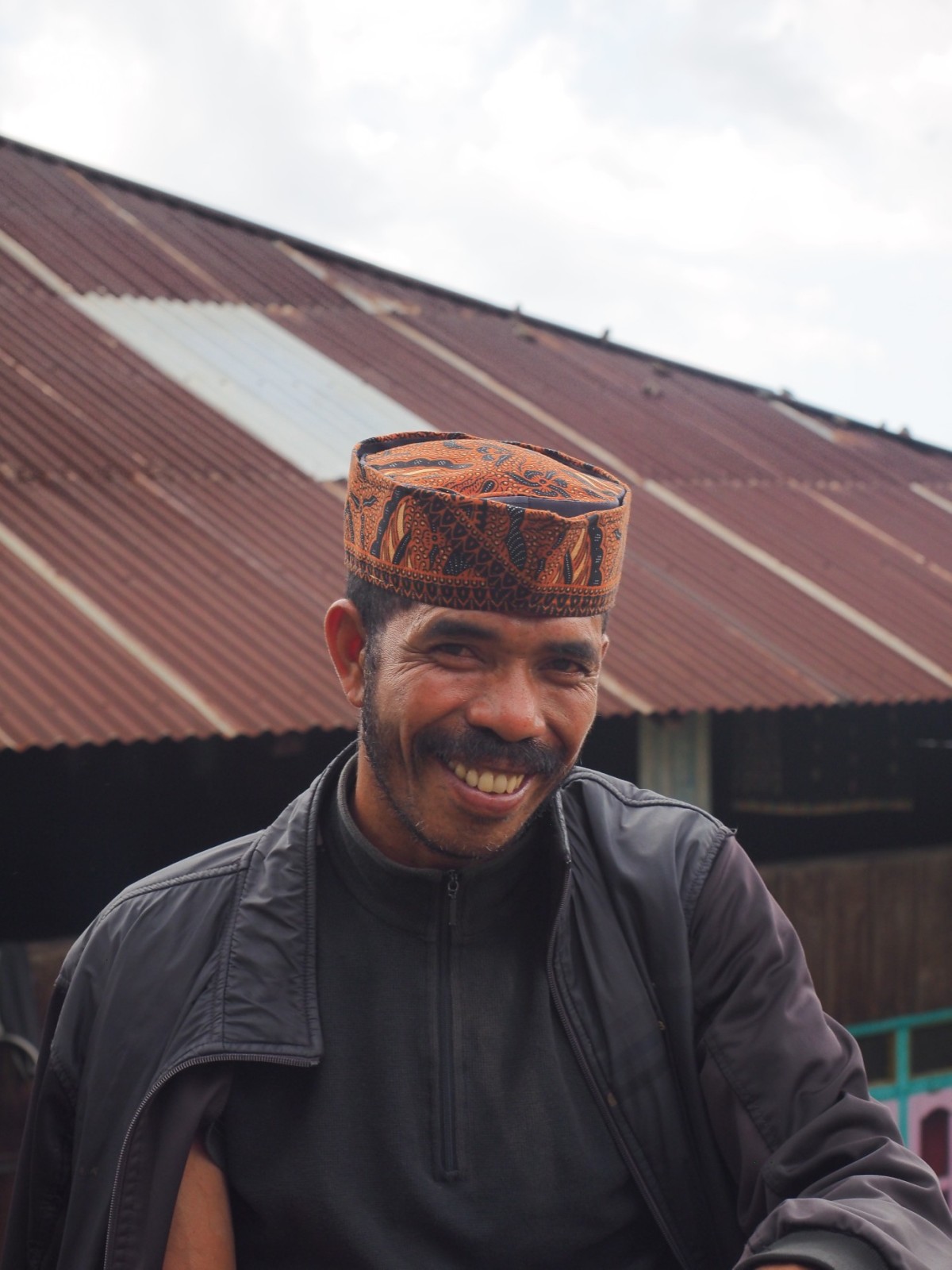 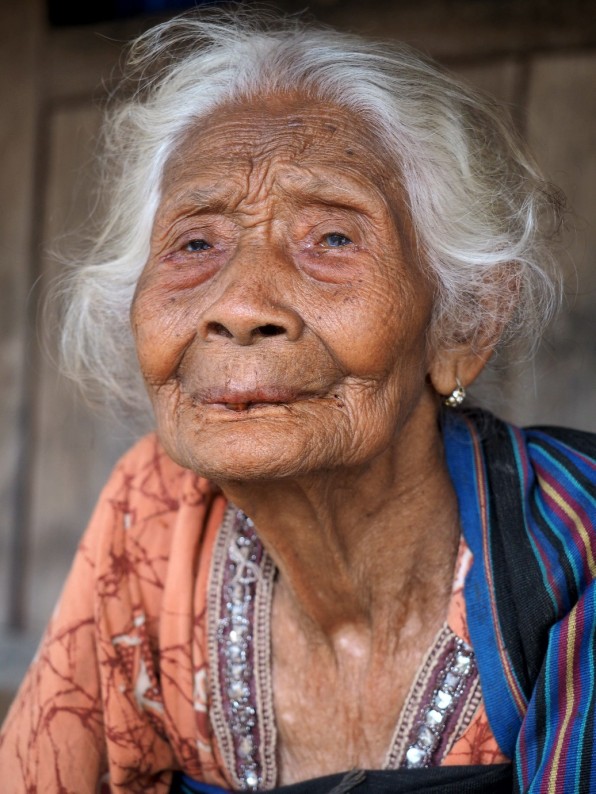 Above and below are residents of the traditional village of Bena. In the full resolution picture of the girl below you can see the entire village reflected in her eyes. 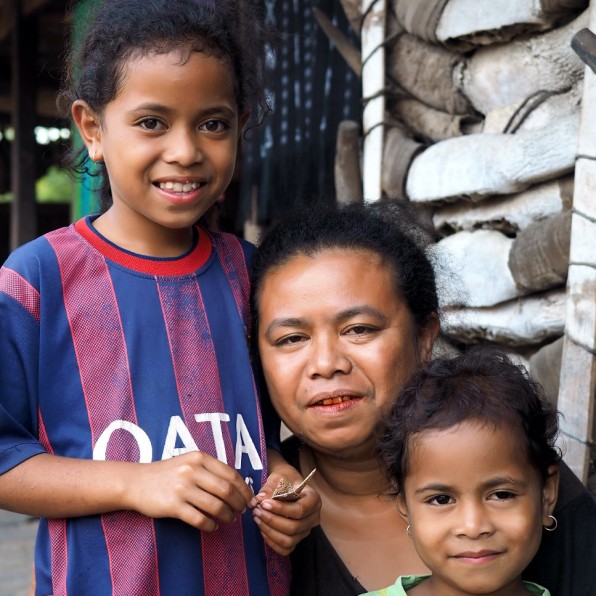 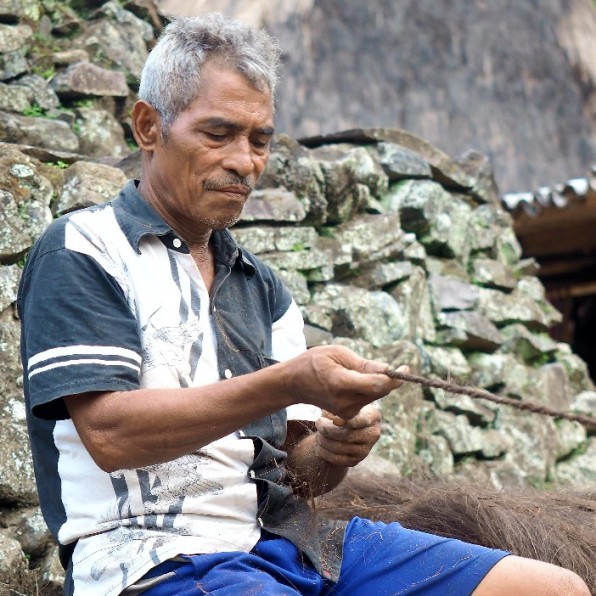 We came across a festival/celebration on the way to Bajawa, we still don’t know what it was about, but everyone was happy! 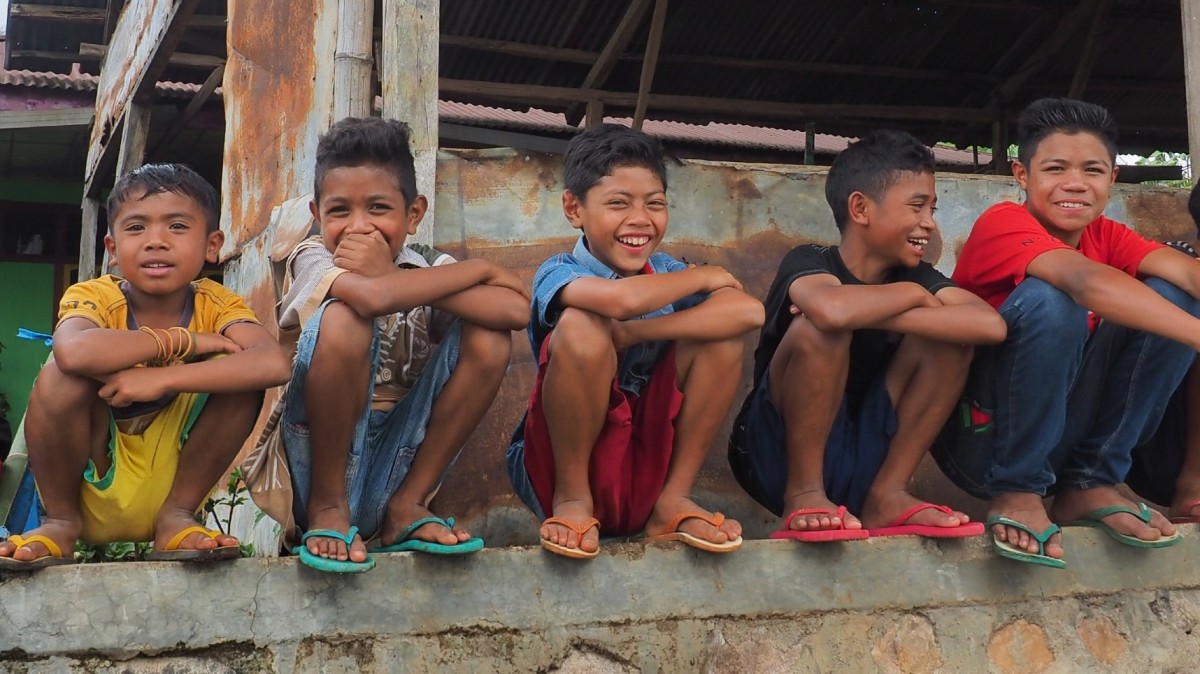 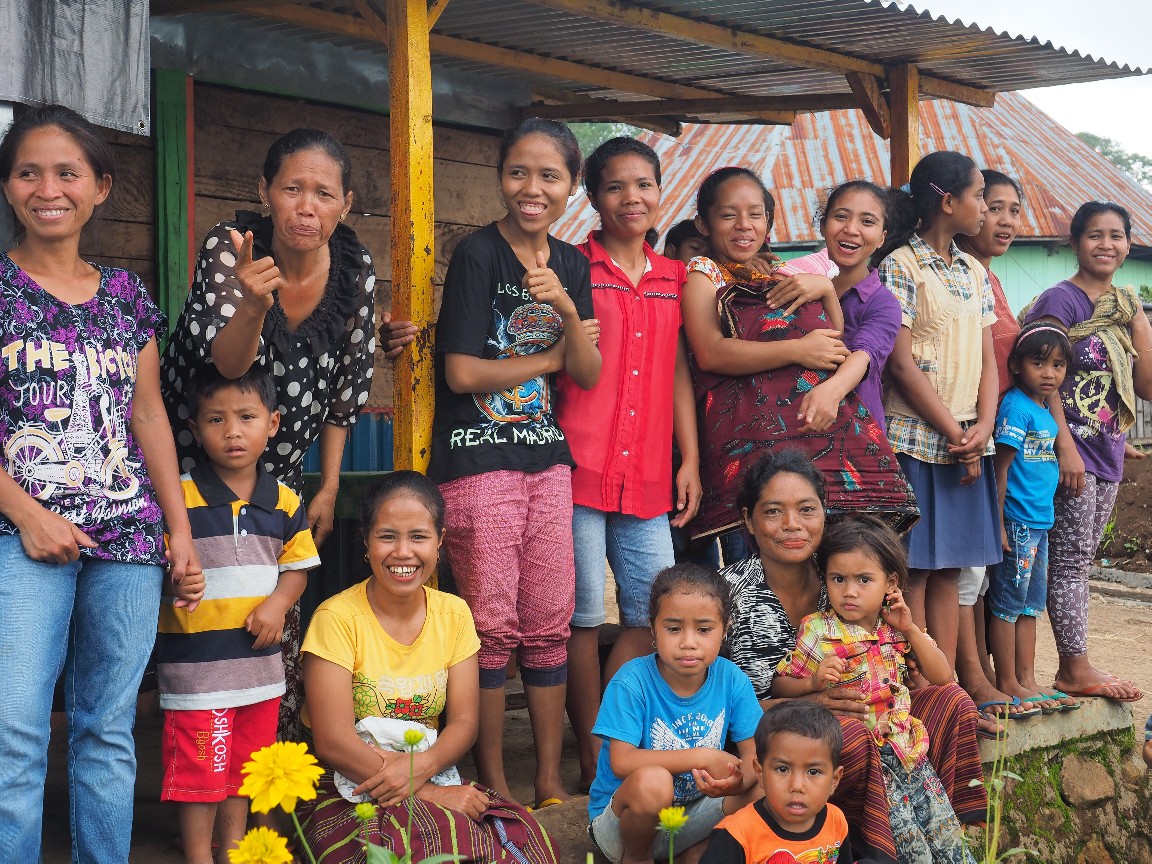 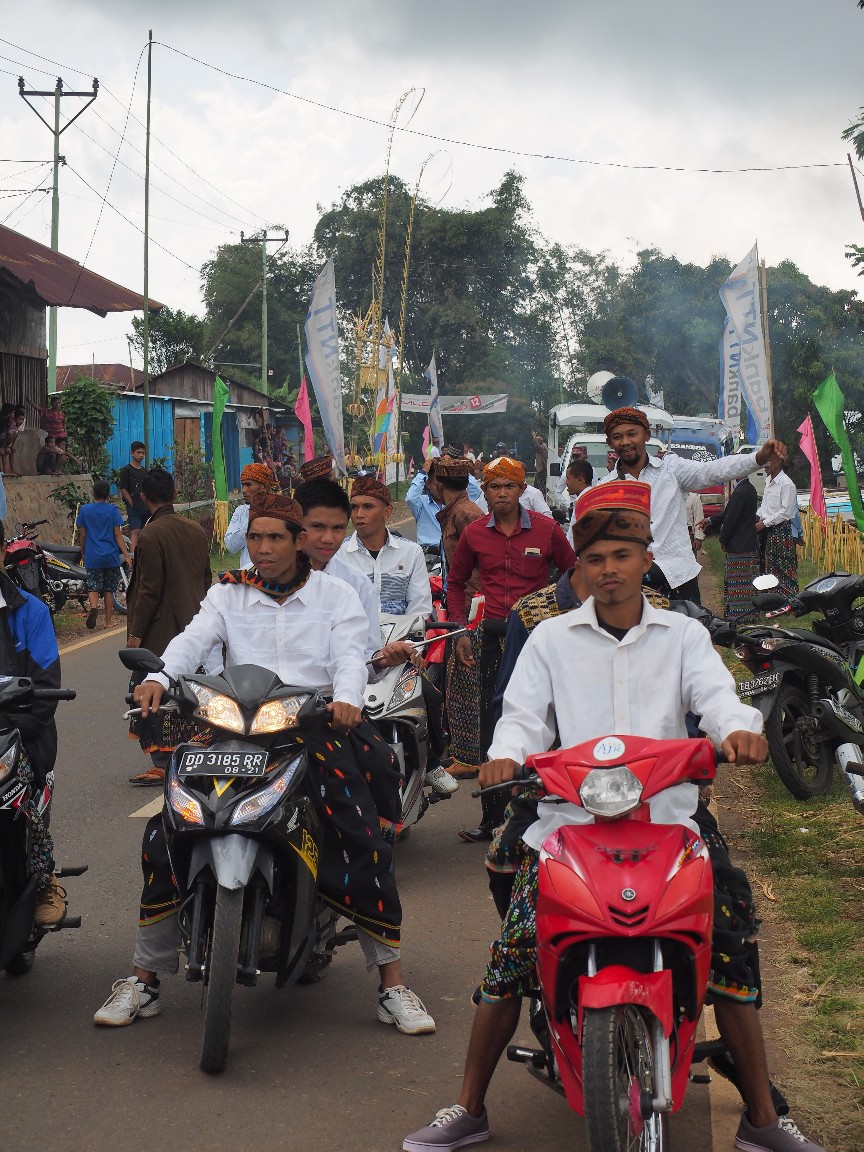 Stopping for a coffee at a roadside Warung, we met this couple.

This family came running out to say hello when we stopped to look at the view. 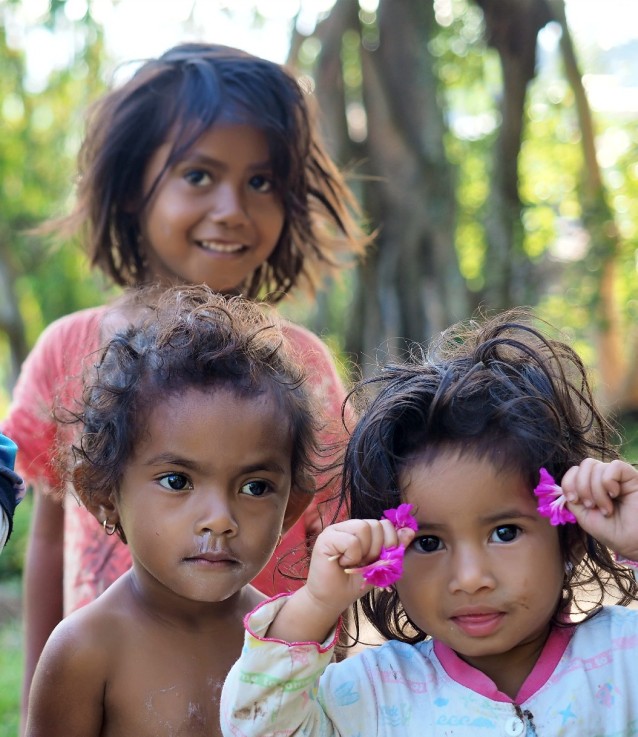 Even Mr Donatus posed for a photo 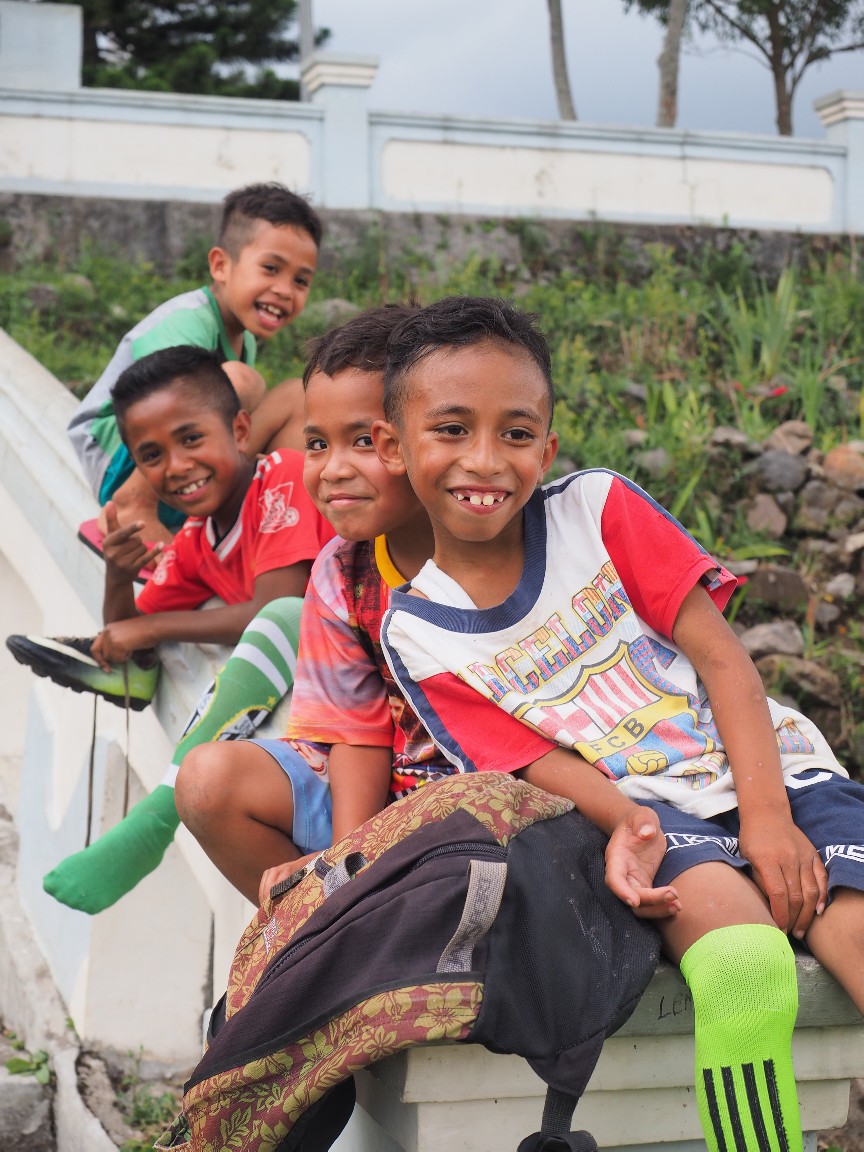 On our final day of the roadtrip, we got up at 4.00am to see the sun rise over the stunning volcanic crater lakes at Gunung Kelimutu. The  three lakes, Tiwu Ata Bupu (Lake of Old People) is usually blue and is the westernmost of the three lakes, Tiwu Ko’o Fai Nuwa Muri (Lake of Young Men and Maidens) and Tiwu Ata Polo (Enchanted Lake) are separated by a shared crater wall and are typically blue green or red respectively.

The lake colours are meant to change on a periodic basis, due to their differing connection to the volcano beneath, although it seems their colours have remained stable for some time. It’s a wonderful sight though, 1,600m up and a little chilly as the sun rises behind the lakes and the clouds swirl around. 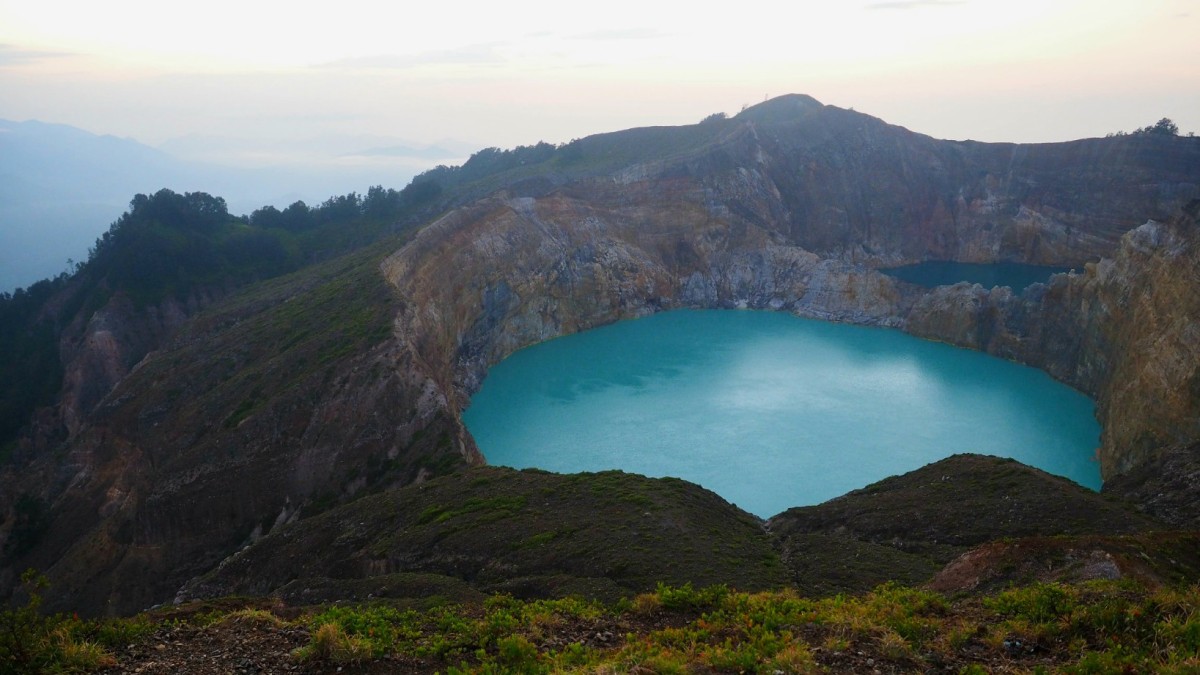 It would be remiss not to mention our time with Scuba Junkie again in Komodo, where we spent six days of wonderful, exhilarating diving, prior to the roadtrip. The story of the diving is similar to our last post from Indonesia Here be Dragons and we once again saw the ocean’s beauty in an unspoilt, majestic environment.

One creature that deserves a mention this time around is the ‘black and gold sapsucking slug’, a rarity underwater, but with a name that seems somewhat unfair, given its beauty.

We also had some challenging dives, where the current (on a full moon) was the strongest we have ever experienced. Hooked on in the aptly named Cauldron, we struggled to avoid being swept away (I saw a snorkel fly by at one stage). Fish were being thrown around likes leaves in an Autumn storm.

We kicked hard to reach the shelter of the coral gardens and Anne needed help from dive buddy Daniel to get out of the current. I was doing relatively OK, until I realised that with my exertions to cope with the current, I’d used up all my air! Again Daniel was able to help, sharing his second stage for our safety stop. Bintang for the BFG at beer o’clock. 🍻

We are now in Sulawesi, diving in Bunaken with Living Colours and thinking about where next on our journey, as the wet season is beginning to arrive in this part of SE Asia.

3 thoughts on “Roadtrip through Flores”